Concerts in Schools
Music Director Lara Webber has conducted LAS concerts at school assemblies in Livermore, Pleasanton, and Dublin elementary schools since 2015. (School concerts scheduled for April 2020 in Livermore were cancelled because of the pandemic.) 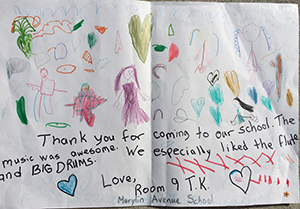 Symphony Association Board Member Carol Boster sent this e-mail to the board, with the subject line “Thank You, LAS!!!!”:

What a gift the LAS has given to 1,000+ students in 2 Pleasanton elementary schools today, Mohr and Hearst!! About thirty orchestra members gave a day of their time and all their talents to acquaint students from K thru 5th grade with the beauties of symphonic sound! Many thanks to Lara Webber for creating a program so interesting to younger students, from Star Spangled Banner to Star Wars — The Force Be With You! She even invited our February cello soloist to perform a Hayden concerto for the students, who were amazed he was just 15 years old! In addition, our Symphony harpist brought her beautiful instrument to share with the students.

The symphonic sound filled the Multi-Purpose Rooms of both schools with rich harmonic sounds full of rhythms appreciated by elementary students. One could watch them wave their arms quietly to the beat or tap their laps, or even lightly clap to the piece.

We gave this wonderful performance to each school for free!!! That is 30 people and their conductor playing for 45 minutes! What a gift! Many thanks to Lara and all the musicians, not to mention the men who helped move all the large instruments! It takes a full team to accomplish this amazing gift. 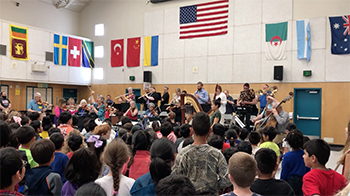 Many thanks to all!

Click on the photo at right to see a 1-minute video of part of the “Star-Spangled Banner” at the opening of an assembly in Pleasanton. For more, go to the LAS Facebook page.

April and May 2018 School Assemblies

In 2018, more than twenty-five orchestra members volunteered at performances at Donlon and Fairlands Elementary Schools in Pleasanton on April 19 and Leo R. Croce and Altamont Creek Elementary Schools in Livermore on May 3, reaching a total of approximately 2,000 students. As in 2017, actor Michael Wayne Rice of the Livermore Shakespeare Festival narrated Sergei Prokofiev’s classic work “Peter and the Wolf,” followed by questions and student responses led by Music Director Lara Webber. The six outreach concerts were made possible by several grants.

On April 20, 2017, the Livermore-Amador Symphony took a full orchestra into Valley View and Vintage Hills elementary schools in Pleasanton, reaching over 900 students in one day with three performances of “Peter and the Wolf” led by Lara Webber. The music 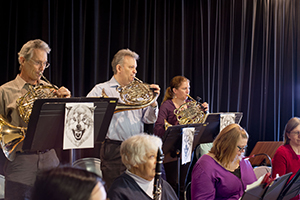 captivated the imagination of the kids, who enthusiastically answered questions and shared their ideas about the music they heard. They were particularly enthralled with the narration by actor Michael Wayne Rice, an associate artist with Livermore Shakespeare Festival. The program was tied into the common core curriculum, with an emphasis on critical thinking, imagery, and storytelling through music. Each performance opened with the “Star Spangled Banner,” with full-throated singing from all the students, and closed with the kids clapping and marching along to Sousa’s “Washington Post March.”

These concerts were made possible not only by the mostly volunteer LAS musicians plus members of the LAS Association board — especially the LAS youth outreach committee — and Symphony Guild, but also by grants from the Pleasanton Arts Commission and the Pleasanton Youth Commission with administrative help and support from the Livermore Valley Performing Arts Center / Bankhead Theater. 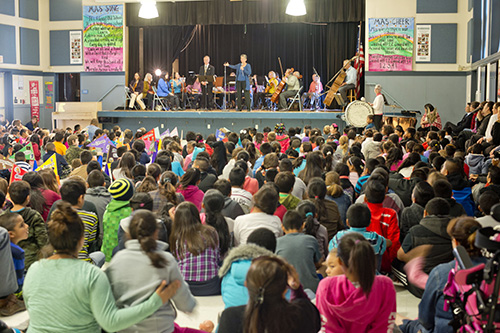 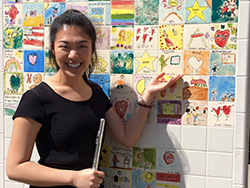 At Vintage Hills Elementary School,
Annie Wu located a tile
she made in 2nd grade.

The musicians played selections from Devienne’s Concerto No. 7 in E minor, the instantly recognized “Twinkle, Twinkle, Little Star” theme as arranged by Mozart, and Prokofiev’s “Peter and the Wolf.” Wu also performed two short solos: Debussy’s “Syrinx” and a modern work by Greg Pattillo, “Three Beats for Beatbox Flute.” (See Wu’s YouTube channel for videos of several of her performances, including the beatbox number). The students were engaged throughout each assembly, but it was “Beatbox” that prompted the most attention. Wu obviously enjoyed playing for and interacting with the kids. Webber did a masterful job of involving the students—eager kids at each assembly raised their hands to share their knowledge and ask questions.